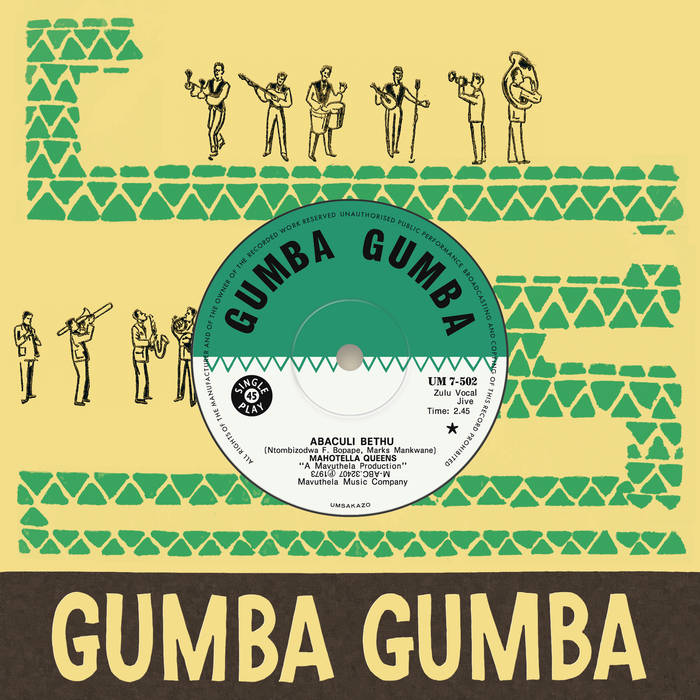 Umsakazo Records continues its series of limited-edition replica 45rpm reissues, all curated from the golden age of South African township jive and transferred from the original master tapes. This second installment spotlights the country’s premier mbaqanga girl group, the Mahotella Queens, and one of the most memorable singles the group ever produced. The dynamic combination of the Queens and bass groaner Simon ‘Mahlathini’ Nkabinde, with the accompaniment of the Makgona Tsohle Band, became the most popular musical attraction in South Africa in the 1960s and ‘70s. Most of their thrilling jive singles went gold, and their stage act – a winning fusion of traditional African war and wedding dances and American twist and jive – cemented the Queens’ position as the yardstick by which other mbaqanga groups were measured.

In early 1973, the Queens would make what was to become one of their greatest hit records. With its pulsating rhythm, sunny guitar phrases and resonant close harmony, “Umculo Kawupheli” (“The music never ends”) celebrates music as a source of joy and healing. Within a year of its release, the single had surpassed sales of 25,000 units, earning yet another gold disc. The tune was included on at least three Queens LPs over the next year – albums at this time were mainly compilations of recent singles – and also formed the core of two documentary films about the group. It is therefore intriguing that “Umculo Kawupheli” was relegated to the B-side on its initial 45rpm release. The A-side, “Abaculi Bethu” (“Our musicians”), gives praise to the patriarchal figures behind the Queens’ success. The lyrics of both songs were written by Francisca Mngomezulu, an original member of the Dark City Sisters and the Queens and one of the then-wives of Queens manager and producer Rupert Bopape. The melodies were crafted by Queens’ primary musical arranger and lead guitarist, Marks Mankwane.

The reach and influence of “Umculo Kawupheli” spread far beyond its intended destination. In 1981, the song was plagiarised note-for-note by punk rock manager Malcolm McLaren, who replaced the meaningful isiZulu words with soundalike English gibberish to create “Jungle Boy (See Jungle)” for his new wave band Bow Wow Wow. The song’s origins were not acknowledged and all composing royalties went to McLaren and the artists. After McLaren more flagrantly lifted additional mbaqanga songs for his solo 1983 record "Duck Rock", the fledgling Earthworks label brought the plagiarisms to light by licensing 1974’s "Umculo Kawupheli" compilation for the Western market as "Duck Food". Two further releases – the Earthworks compilation "The Indestructible Beat of Soweto" and Paul Simon’s "Graceland" – resulted in the first overseas tours by Mahlathini and the Mahotella Queens, ensuring the wider world was able to hear authentic mbaqanga as originally intended, directly from the pioneers of the style.