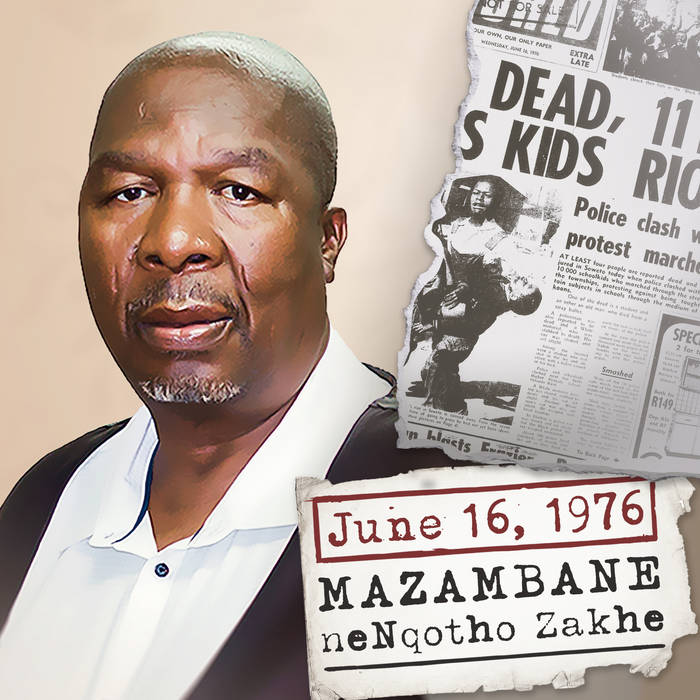 With his ultra-baritone rasps, squeezed vocal phrases and distinguishing tribal marks, the great MAZAMBANE carved out a significant place in history as one of South Africa’s most popular and recognisable vocal stars during the era of Mbaqanga township jive. He was a familiar name to township audiences through the 1970s and well into the 1980s, following in the footsteps of MAHLATHINI, the first hugely successful ‘groaner’. Mazambane is best remembered today for his excellent musical work with the MAHOTELLA QUEENS, ABAFANA BASEQHUDENI and ABAFANA BESISHINGISHANE, as well as a number of huge hit recordings including “HAMBANI MAGODUKA”, a humorous tale about the hurried ways of Johannesburg city dwellers. Now in his 70s, Mazambane is the lone survivor of a long-forgotten era when groaners walked the African townships as heroes. But the changing times haven’t stopped him from creating excellent music. These days, Mazambane performs a vibrant brew that he has dubbed ‘saka music’, a combination of different South African sounds including Mbaqanga and the traditional Zulu style Maskandi, underpinned by rootsy acoustic guitar played by the groaner himself.

Mazambane’s career officially kicked off upon joining the all male line-up ABAFANA BASEQHUDENI, formed in 1974, bucking the girl group trend that had been a mainstay of South African music since at least the early 1960s. The five men – Mazambane, Joseph Mthimkhulu, Elphas ‘Ray’ Mkize, Daniel Nhlapo and lead singer Robert ‘Mbazo’ Mkhize – shot instantly to stardom with topical lyrics, upbeat mbaqanga beat and vital injection of comedy into their dance routines. In 1978, Mazambane, Mthimkhulu and Nhlapo left the group to form ABAFANA BESISHINGISHANE, recording a huge number of hits such as “Hambani Magoduka” (“Go away loafers”) and “Umshado Ka Nomakhosi” (“Makhosi’s Wedding”), as well as honing their thrilling stage act with hilarious pastiches of traditional Zulu dance.

But in the early 1980s, Abafana Besishingishane began to falter in the popularity stakes. Mazambane decided to go solo, developing a successful individual career as ‘Mazambane neNqotho Zakhe’ that rivalled Mahlathini at his peak. Mazambane kept up with the times too, trading the now-passé mgqashiyo groans for soulful Zulu harmonies and watery keyboard backing. The infusion of modern styles into his own brand of mbaqanga helped Mazambane to maintain a successful career through the 1980s, even through the rise of disco and bubblegum music. As kwaito and house music took over the music scene in the 1990s, Mazambane faded into obscurity.

But now, after a lengthy period observing the ever-changing musical trends and examining different genres, Mazambane has returned.

This new release, JUNE 16, 1976, reflects on the senseless loss of black lives in South Africa, particularly during the Soweto Uprising. “I really don’t know how our leaders deal with these issues,” reflects Mazambane in the title song “IZIDUMBU” (“DEAD BODIES”), “because when I look at our mountains and open velds, there are dead bodies all over.” His backing voices join him and echo his sentiments through the repeated phrase, “Gcwel’amaqele” (“All over the hillsides”). They ask, “What will we tell the Almighty God? Some dead bodies are discarded in the sugar cane fields… others in the valleys… and for what?” It is a powerful and emotive recording that will surely gain traction among listeners both in South Africa and across the world.

With all his musical prowess still completely intact, the mighty Mazambane is back and ready to do business!