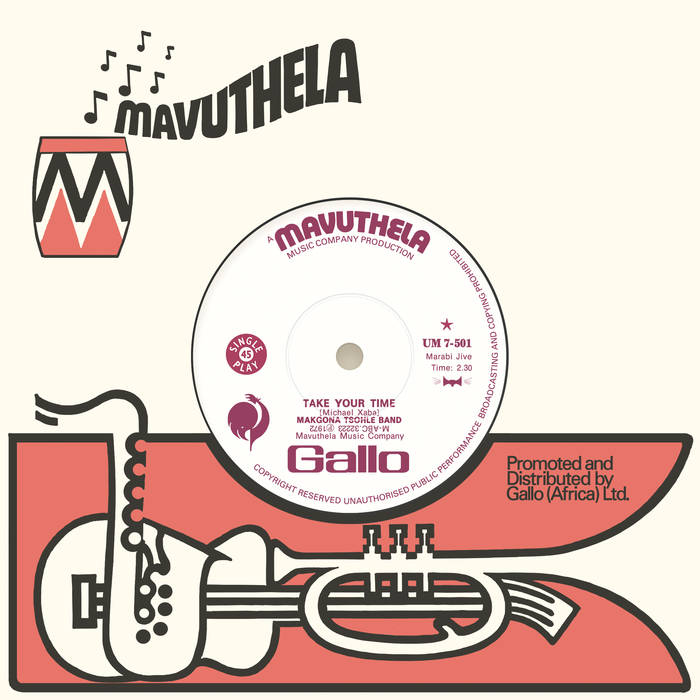 Raymond Chalmé the A-Side features the greatest sax riff in recorded history, so stoked this is getting reissued!!!

Umsakazo Records is proud to present the first in a series of limited-edition replica 45rpm records. This collection of ‘seven singles’ has been carefully curated from key holy-grail recordings made during the golden age of South African township jive. It is fitting that the first in this series comes from the band so closely identified with the genesis of the style – the Makgona Tsohle Band, the hardest working session team in apartheid-era South Africa.

Under the guidance of talent scout and producer Rupert Bopape, the Makgona Tsohle Band (“The Band That Can Do Anything”) would underpin literally hundreds of recording sessions as the house band of Gallo Africa’s Mavuthela Music subsidiary from its launch in 1964 right through to 1977. This included all of the hit records made by Mahlathini and the Mahotella Queens, as well as classic hits from the Mthunzini Girls, Irene Mawela, Abafana baseQhudeni, Lemmy ‘Special’ Mabaso, Reggie Msomi, Sipho Bhengu, Teaspoon Ndelu and so many more artists essential to the sound of urban jive music.

The Mavuthela operation formed the core of Gallo’s ‘black music’ production and, by the mid-1970s, accounted for as much as 20% of the organisation’s total income. Mavuthela’s market dominance was usually attributed to the resourcefulness of director Bopape, along with the well-oiled machine that was Gallo Africa. True enough, Mavuthela releases were of a high musical and technical quality and were always well publicised, be it through Gallo’s promotions department or the countless stage performances made by Mavuthela artists in South Africa and neighbouring countries.

But the Makgona Tsohle Band was the real secret to Mavuthela’s success. Its repertoire stretched from traditional sax and accordion jive right through to disco and ‘English pop’, and this 45rpm sees them effortlessly tackling the burgeoning 1970s Soweto soul-jazz sound. Ironically, the musical influence behind this recording was almost certainly Michael Xaba, the seasoned African jazz veteran who had scornfully referred to the newer strains of jive in the late 1950s as ‘mbaqanga’. As the Makgona Tsohle began making history as the country’s first all-electric ensemble, that epithet would resurface and was eventually ‘reclaimed’ as a term of endearment for the music they had largely created. By the 1970s, Xaba and a number of other longstanding jazzmen found themselves employed by Mavuthela as musical directors, under the initiative of Bopape who was not particularly musically inclined himself. The Makgona Tsohle Band members consequently gained a rich musical education and were fully equipped to move into arranging and producing roles when Bopape retired in 1977.

Issued only once on a 45rpm single in 1972 - and restored from the original master in Gallo’s Johannesburg tape vault - “Take Your Time” and “Marabi Blues” both offer new insight into the diverse catalogue of this greatest of all mbaqanga bands.